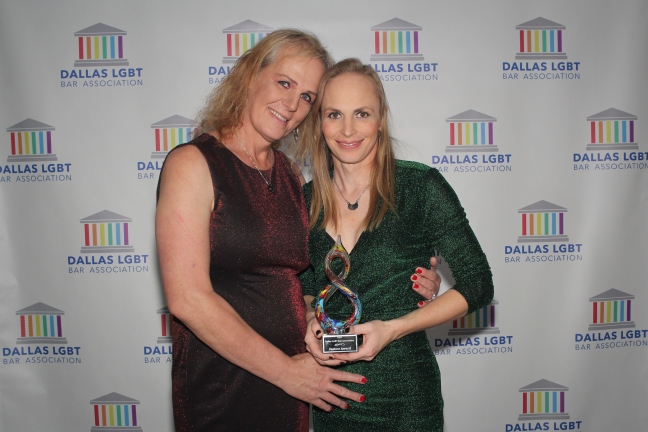 Dec. 8, 2019 — The year 2019 was marked with a rise in violence against the transgender* community in the Dallas-Ft. Worth metroplex. In reflecting on these events and the need for strong leaders in our local LGBT+ community, the Dallas LGBT+ Bar Association (“DLGBTBA”) Board established the Justice Award in December of 2019.

The Justice Award is given to one person who has made a significant contribution to the advancement of the LGBT+ community by fighting injustice.  The recipient of the DLGBTBA’s Justice Award meets the following criteria:

The DLGBTBA awarded its inaugural Justice Award at its annual Holiday Party on December 8, 2019, to Assistant City Attorney for the City of Dallas, Jayla Wilkerson.

Wilkerson is a graduate of University of North Texas (UNT), with a Masters in Criminology and a Juris Doctor from the University of Pennsylvania.

In 2019, when the City of Dallas moved the annual Pride Parade, Wilkerson organized the Pride is a Protest March in response to the complaints many members of the community had about the new location for Dallas’ Pride Parade.

Wilkerson has organized the Dallas Transgender Day of Remembrance (TDOR) for the past two years, and is also the 2019 Secretary of the Stonewall Democrats of Dallas.

Wilkerson moved the crowd of over 100 attendees at the DLGBTBA Annual Holiday Party during her acceptance speech, where she spoke candidly of her personal life and professional career.

The Dallas Voice also covered Wilkerson’s receipt of the DLGBTBA’s Justice Award on page 27 of its December 20, 2019, issue.